The first Terminator game on the PC, Terminator 2029 opens up with a series of animated scenes depicting a war-torn LA, inspired by the futuristic man vs machine apocalypse that was briefly depicted in the original two movies. As the story goes, the Resistance movement (humans fighting SkyNet) managed to find a working prototype of a Terminator unit. Which a few modifications and improvements, the Terminator (as in, you) can and will be used against its former mechanical overlords.

while you may think this is just an average shooter, it’s really not. For better or worse, it plays a bit like a less sophisticated dungeon crawler. You don’t ‘smooth scroll’ down the levels as you would in Wolfenstein, but rather side-step frame by frame, an exercise that would be terribly confusing if it weren’t for the onscreen automap. In any case, it makes the whole experience can be disorienting if you don’t have those dungeon crawler synapses firing.

But as far as delivering where solid graphics and sound, the game does not disappoint. Coming on CD (a rare format for early 1990s games), Terminator 2029 contains digitized speech, music, numerous sound effects, fairly sharp graphics and a professional attention to detail. Well, mostly at least, since you do find the occasional gameplay hindrance. Take targeting, which is handy as long as you don’t accidentally target on fellow resistance members. Sadly, they won’t recognize you as an allied weapon, and will attempt to fire upon you. Waste too many of them and the commander will give you a stern warning.

Interestingly, this might be the first game where your health regenerates. At least partially, and it sorta makes sense in Terminator’s sci-fi setting. Your armor can self repair minor damages, but this takes time – hell, it can take upwards of a minute in some cases, which is as boring as it sounds. The Radar system is another matter, as it doesn’t seem to work correctly. Several times I was in the clear only to be attack by multiple bad guys, but with no indication on the Radar screen.

These hiccups aside, the game does impress for the first few levels. Objectives wary in scope, from rescuing a wounded companion to recovering important data, to detonating explosives in the heart of a huge enemy bunker. Alas, the novelty factor wears down after several levels and you realize the game doesn’t have anything else to spice things up. Sure, new weapons are unlocked, but you’ll largely face the same enemies and shoot through the same-looking underground maze for the tenth time in a row. It just gets old eventually. 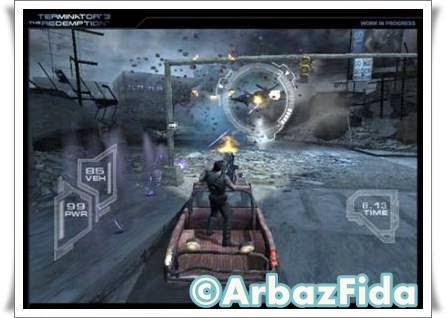