I have Microsoft Entertainment Pack 1 through 4, each having several Windows games. They are installed from 3 1/2' diskettes and are quite old (probably still from the times of Windows 3.1). I would like to install them on a new PC that has Windows XP but wanted to make sure the installation won't corrupt any Windows XP files. 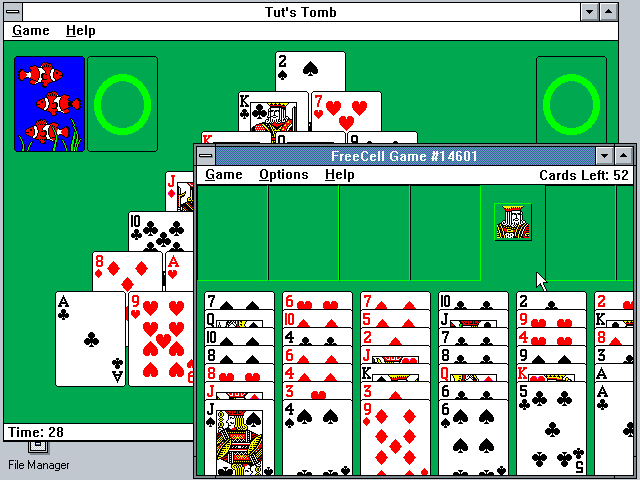 Back in 1990s inclusion of Solitaire (Klondike) and Minesweeper in Windows has resulted in billions of hours of lost productivity over the years. Starting with Windows 98 other version of solitaire joined the suit - FreeCell, Spider, Tri-Peaks and Pyramid. As a part of the standard Windows installation those games have been popularized around the world. For each of those games millions of clones have been created on all possible platforms. So why should you give our version a try? We combined all six games (Klondike, Spider, FreeCell, Tri-Peaks and two flavors of Pyramid) in a tiny download package. The fun of original games is preserved but some improvement are made to make it easier to play on the small factor devices. In particular, you don't have to drag individual cards - drag&drop whole column, only proper cards will move the rest will snap back. The scoring all the games is simplified to track only number of moves to solve the puzzle. If you stuck, feel free to use hints or undo - implemented by all the games. Use menu (top-tight corner) to change the game type, difficulty, check score, help or to start a new game. Don't forget to check our Game section for other fun games...