Okay, let’s get this out of the way—Jay-Z is clearly a genius. The release strategy for his twelfth studio album, Magna Carta Holy Grail, is one for the history books: An unprecedented deal with Samsung that guaranteed the album sold one million copies before its official release. Jay’s move was so bold and brazen that Billboard and the RIAA will begin changing the way they report album sales and certifications. Never has Jay’s signature quote—“I’m not a businessman, I’m a business, man”—rung so true.

But uncanny marketing savvy aside, the question still remains. After all the hype, the hoopla, the anticipation, does Magna Carta Holy Grail live up to the lofty expectations? Is the album actually any good? For the most part, yes, it is.

The album’s theme is centered on duality, namely that of being the embodiment of both the American Dream and the American Nightmare. Jigga plays the two roles well: He is living proof that anyone can succeed in this great country of ours, but, at the same time, the successes he’s achieved weren’t meant for him. He talks about this on the horn-and-piano accented “Somewhereinamerica,” wherein he deftly and humorously reminds us that he’s the reason “Miley Cyrus is still twerkin’.” And a Jay-Z song was on, indeed.

He expresses his desire for greatness on “F.U.T.W.,” and encourages listeners to desire the same. After all, the spoils are for the taking: “Don’t be good, my nigga, be great/After that government cheese, we eatin’ steak/After them projects, now we on estates.” And while songs with titles such as “Picasso Baby” and “Tom Ford” initially seem like materialistic epistles from a braggart from the hood made good, they’re actually quite revelatory. Jigga equates himself not with Buffett and Rockefeller, but with Basquiat, di Vinci, and Riccardo Tisci. He’s yearning to align himself with a certain level of artistry, luxury, and magnificence.

One thing that Jigga rarely gets credit for, and something he does well, is his knack for introspection and self-reflection. For instance, listen to the somber, Mommie Dearest-and-Biggie Smalls sampling “Jay-Z Blue,” which, over mournful strings and urgent drums, includes the refrain, “Apologies in order/To Blue Ivy, my daughter.” Another example is the album closer, “Nickels and Dimes,” in which he addresses his critics. “My flow is a gift,” he tells us. “Philanthropist.” 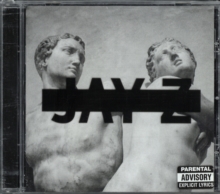 Blue-eye soul man Timberlake tries his best to save the Nirvana-sampling album opener “Holy Grail,” but it’s an unfortunate mess. That’s not the only misstep. “La Familia” is uninspired and awkward, and while “Part II (On the Run),” featuring wifey Beyoncé, may heat up radio and the clubs, it sounds extremely forced and contrived, and completely takes Hov out of his wheelhouse.

Sonically, the album isn’t as adventurous as Kanye West’s Yeezus, but, thankfully, it doesn’t adhere to traditionalism so closely that it becomes a bore, like J. Cole’s Born Sinner. Timbaland handled the bulk of the production, and it’s shocking to learn this, as most of the songs do not have that signature Timbo sound (which was even recognizable on this year’s excellent, ebullient The 20/20 Experience). Other contributors behind the board include Pharrell, Swizz Beatz, Boi-1da, Mike Dean, Mike Will Made It, Hit Boy, and WondaGurl, a 16-year-old Canadian beat prodigy who laid the foundation for the superb, Sizzla-sampling “Crown.”

At one point on Magna Carta …, Jay-Z says, “Old man, just stop/I could if I would but I can’t/I’m hot.” It’s hard to argue with him. Though he’s grown long in the tooth by hip-hop standards, Shawn Carter has still managed to maintain his relevance, change the game, and, most importantly, continue to make solid music. Magna Carta … may not be his magnum opus, but it certainly earns a check in the “Win” column.

Jay-Z to Partner with Adult Swim for Animated...

Brian Bradley AKA The Astronomical Kid AKA Astro...