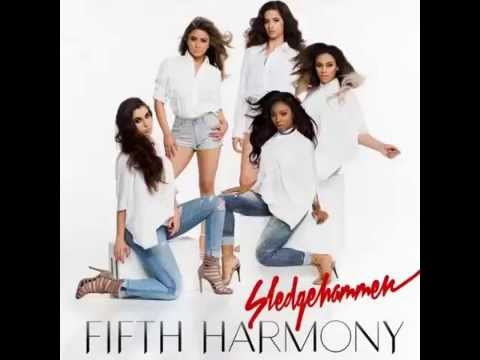 Fifth Harmony’s “Sledgehammer” is one of the most intrinsically joyful pop singles of the year, and the five members of the girl group appear to be having a blast in the glamorous official music video for the track, which was unveiled on Tuesday morning (Nov. 25):
The concept of the video is fairly straightforward, with shots of a silhouetted dude pounding on barrels with two (you guessed it) sledgehammers while the 5H ladies pose next to a unicorn sculpture and pout from suspended swings. Aside from the dresses that the members wear in a few scenes, the “Sledgehammer” clip is washed of color, instead allowing Fifth Harmony to demonstrate their maturity and dramatically pose in off-white outfits and in front of a plain backdrop. The video is less of a sledgehammer’s wallop and more of a reflex test, but the giddiness radiating from the girls is pretty infectious.

Earlier this month, it was announced that Reflection, Fifth Harmony’s debut album, will be released on Jan. 27, 2015, after previously being given a December release date. “Sledgehammer” is the second single from the set, following “Bo$$,” which peaked at No. 43 on the Hot 100 chart.
On Monday, 5H’s Camila Cabello confirmed that her romance with Austine Mahone had ended. Fifth Harmony had supported Mahone on the road this past summer, and opened for Demi Lovato before that trek.